Revitalization of SHANKH KSHETRA, Puri as a heritage zone-1 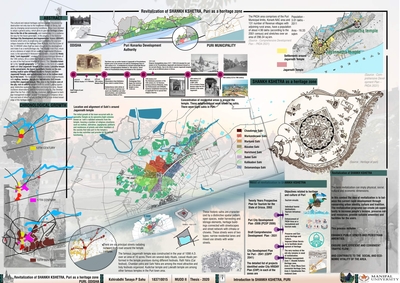 The cultural and natural heritages are progressively threatened by devastation not just because of the, old fixed pattern of decay yet in addition by changing social economic conditions. Puri is one of the 12 HRIDAY urban areas that has been decided for the revitalization and make it as a world legacy city. The coastal city Puri, arranged a good ways off of around 60 km south of state capital Bhubaneswar, is the focal point of Hinduism that revolves around the Hindu deity "Lord Jagannath", cherished in a Kalingan sanctuary of the twelfth century. It is one of the five Khetras of Odisha. The 'Shankha Kshetra' is the 'holy geography' of Puri town as a conch shell with Shri Jagannath Temple at the middle, Loknatha sanctuary at the apical point, the Grand Road(Bada Danda) as the interfacing focal spine between Gundicha Temple and Shri Jagannath Temple. Sahis are neighborhoods with mathas, sanctuaries, jagagharas and akhadas that surround Shri Jagannath temple. This zone is the notable center of the city; wealthy in social account with its differed assembling typologies, unmistakable spatial setup and living conventions. In view of above perceptions, and in consistence with the City Development Plan for Puri - 2041, the key challenges with respect to heritage management at Puri are poor maintenance of religious structure and lack of infrastructure. Further, visitors have limited knowledge of the heritage zones. This thesis project aims to revitalize the heritage core city and interlink the built heritages with natural heritages through urban design interventions.